As noted in previous blogs, I am working on analyzing and understanding Nahuan dialectology, dialectology of course being the study of patterns of regional variation.

The way this works is that one looks at the linguistic traits that vary between how Nahuatl is spoken in different regions, and then classify the dialect of each region into the varieties that they are most similar to. Classification can be based simply on superficial similarity, grouping everything similar together, or it can be based on historical development, where you classify dialects together that seem to share a single origin because they display shared innovations.

Another way is to classify by region. Here the tricky part is that the number of possible regions is almost infinite. One could potentially classify each of the many thousand local communities where the 1,5 million Nahuatl speakers live each as a separate dialect. Because every local community has certain ways of speaking that set them off from their neighbors. Dialect areas then are areas regions where certain traits a more frequent than in other regions, with the caveat that not every dialect in the area necessarily has all of the features characteristic of the area were it is spoken, and some dialects in other regions may have them too.

In the literature on Nahuatl dialectology the basic division is both regional and historical. It divides all the Nahuan languages into two basic groups: The Eastern and the Western dialects. This grouping was first proposed by Una Canger and Karen Dakin in 1985. They had realized that some dialects systematically had the vowel /i/ in certain words where other dialects had /e/. They also noted that all of the words where this correspondence was found corresponded to words that had oeiginally had the vowel *u in Proto-Uto-Aztecan (PUA).  The words they focused on were tesi/tisi "to grind" (from PUA *tusu), sentli/sintli "corn" (from PUA *sunu), iste/isti "fingernail" (from PUA *sutu) and ihte/ihti "stomach" (which Daking and Canger reconstruct as coming from PUA *patu, I am personally a little dubious of this form). The i forms were generally found in the dialects in the extreme eastern range of the area where Nahuatl is spoken, and the e forms were generally found in the western extreme.

Later Dakin (2000) and Canger (1988) each added some new traits to each of the two areas. Canger noted that in the Western area, the prefix o- is used to mark the past tense, and in the Eastern area it is absent, and that Eastern dialects tend to put the adverb ok after the predicate it modifies whereas in the West it precedes it. Dakin noted that the Western dialects tend to have ye- in a number of forms where the Eastern dialects have e- (e.g. yetl/etl (bean), yestli/estli (blood), yeyi/eyi (three) and yepatl/epatl "skunk"). Dakin saw that each of these words originally began with *p in PUA, and she surmised that the *p had changed into /y/ in the West but had disappeared entirely in the East.

In a recent paper of my own I argue that the two dialect areas also differ in the way that they negate sentences. Western dialects all use the adverb ahmo or ammo as the negator in all sentences. But in Eastern Nahuatl other words are used, either instead of ahmo or in addition to ammo. For example in the Huasteca region the negator is the prefix ax-, in the Puebla Highlands it is kanah, in Guerrero it is ka, and in the isthmus it is aya', ate, the prefix ah- or in Tabasco the word até and in El Salvador nite, inte ot tesu. In many Eastern varieties there are more than one negator and the use depends on the mood of the clause, one may be used for imperatives, subjunctives and conditionals and another for realis/indicative sentences for example.

The map below shows the locations of Eastern (red) and Western (blue) dialects. It also includes the extinct Pochutec language which seems to have split from proto-Nahuan before the split between Eastern and Western varieties. I have colored the varieties of Central Guerrero purple, that is because they seem to me to be conservative sharing few of the innovations of the other areas, and possibly have split also very early perhaps before the East-West split. (Note also that the varieties in Chiapas went extinct in the early 20th century, and that there are very few speakers in Jalisco). 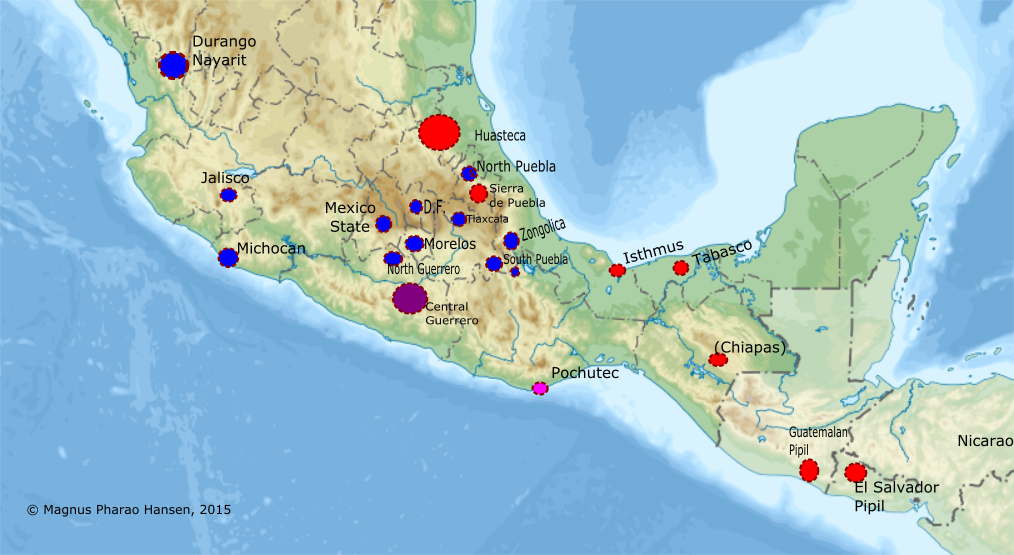 So what about "Classical Nahuatl". Well first of all I don't think that is a very good name for the colonial Nahuatl that we know from so many sources. I think it is better to call it colonial Nahuatl. The best known variety of colonial Nahuatl is the one from Mexico City, based on the dialect of Tetzcoco. Canger (2011) has argued very convincingly that this dialect which she calls Urban Nauatl, was a mixture of Eastern and Western varieties, that arose as people form different dialect areas mingled in the great city of Tenochtitlan.

Definitely many of the Central varieties seem to have traits from both Eastern and Wstern branches, and it is sometimes difficult to classify them. This is probably because the Eastern varieties must have been in the area longest and Western dialects then arrived later imposing their prestige language on the earlier speakers of Eastern Nahuatl. This would mean that many of the Central dialects (e.g. in Puebla, Morelos, Zongolica) are Western dialects with an Eastern substrate.