No Snopes.com, the word guacamole does not come from the Nahuatl word for "ground testicles or avocados".


We all know that guacamole is delicious (seriously, if I had to choose one food to eat the rest of my life guacamole would be a strong candidate), but what does the word mean?

Today Snopes.com, usually a good source for debunking of all kinds of myths, wrote about Nahuatl. Unfortunately they got it pretty much backwards, so now I have to write a blog-post debunking the debunkers.(Snopes has since corrected the entry, I give the link at the end of this blogpost) 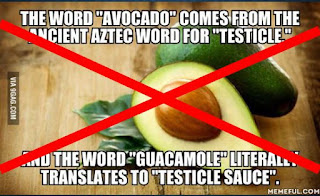 The myth that Snopes was trying to debunk is that the word "guacamole" comes from a Nahuatl word meaning "testicle sauce". That it does is a meme that sometimes makes the rounds on the internet. (for example here, and here).

After "fact checking" the myth with dictionaries, before rewriting the article the Snopes writer concluded that "Avocado" does indeed come from a Nahuatl word that "also means testicle". But that "mole"  comes from the Spanish word moler "to grind". Neither of these conclusions are entirely correct, but the latter was outright false.

1. The Nahuatl word ahuacatl does not mean testicle.


The Nahuatl word for the avocado (Persea americana) /a:wakatl/ (variously spelled ahuacatl, aguacatl, auacatl etc.) comes from a proto-Nahuan word *pawata which also means "avocado" - the word pawatl is still used for wild avocado in some Nahuatl varieties. All Nahuatl dictionaries give avocado fruit as the primary meaning of /a:wakatl/. But does or did the word also mean "testicle"?

A number of English etymological dictionary mention "testicle" in relation to the Nahuatl etymology of Nahuatl. One of them is Merriam-Webster and another is the Etymology Dictionary Online (which a couple of years ago I convinced to change the definition so that it no longer states that the original meaning of Nahuatl ahuacatl was "testicle"). They in turn get their data from Frances Karttunen's 1987 "Analytical Dictionary", the most esteemed Nahuatl-English dictionary, which lists the meaning of ahuacatl as simply "avocado, testicle". Karttunen in turn derives most of her entries from Alonso de Molinas 1571, which gives us the definition as "fruta conocida, o el compañon" (i.e. "a known fruit or the testicle" he uses the now outdated Spanish word compañon for testicle).

So the etymology is sound in the sense that we know that in the 16th century the word was used to refer both to the fruit and the body part - at least by some people in Mexico City where Alonso Molina grew up and learned Nahuatl on the streets with his indigenous friends. We know little more than that though, for all textual references to the word that I have come across use it only in the botanical-culinary meaning. And in Nahuatl speaking communities I have never met anyone who considered the word /a:wakatl/ to refer to anything but avocadoes. Molina himself gives a clue that this is the case because if you look in the Spanish part under compañon. Here, he does not give auacatl as a possible translation only the word atetl, which is a normal, anatomical, non-slang word for testicle in Nahuatl today and clearly also in the past (another common word is xitetl).

It would appear that the anatomical meaning is a euphemism, based on a certain similarity of shape, the same kind of euphemism that we make use of when we refer to a penis as "a wiener" or to testicles as "nuts" (or when Spanish speakers refer to testicles as "huevos" "eggs" or cebollas "onions"). We would however not generally consider it to be "partly correct" to say that "wiener schnitzel" kind of means "Penis schnitzel" or that "nut case" kind of means "testicle box". Nor would Spanish speakers consider it meaningful to say that "torta de huevo" kind of means "testicle sandwich".

So, no the Nahuatl word ahuacatl /a:wakatl/ does not mean "testicle", but because of the evocative shape of the fruit  it can be used metaphorically in that extended sense. And it is this extended sense that Molina recorded.

That was one out for snopes, but the second part is actually worse. Here the snopes writer goes completely off track.

2. The Mexican Spanish word "mole" does not come from Latin "molēre" but from Nahuatl /mo:lli/ "sauce"

She claims that the "mole" part of the word "guacamole" comes from the Spanish "moler" "to grind". This is intuitively plausible because indeed there is a bit of grinding taking place when one converts avocados into guacamole. But that two words look and have a plausible meaning alike of course does not mean that they share the same etymology. In this case there are very good reasons to think that the "mole" part does not come from Spanish, but from the Nahuatl word /mo:lli/ "sauce". The Snopes writer realizes that the word "molli" means sauce, but still she makes the weird claim that the word has now "converged with the infinitive moler". I dont know what this is supposed to mean.

But the main problem is that she was "unable to determine whether it [molli] originated from Nahuatl or entered it as a loan word from Spanish." I can help Snopes with that one: The Nahuatl word molli "sauce" is a noun derived from a root *mo:l that has to do with hard or thick things becoming liquid or soft. We have mo:loa "to dilute a sauce", mo:lehua "for earth to become soft" (and perhaps moloni "to bubble, swirl, flow"though the vowel length doesnt sem to match). So mo:lli most definitely is a native Nahuatl word meaning something like "watery emulsion".

The best reason is the Nahuatl word for guacamole is ahuacamolli, which is easily analyzable as "avocado sauce". The Nahuatl word ahuacamolli, is indeed also the generally accepted source of the Spanish word (even the RAE which is not known for getting indigenous language etymologies right actually gets this one right). But Snopes claims that it is the other way round, that Spanish guacamole was borrowed into Nahuatl as ahuacamolli! This would be a very weird borrowing indeed, since it was Nahuas who taught Spaniards to make ahuacamolli in the 16th century, and since Molina's dictionary (Molina defines auacamolli as a "manjar de auacates con chilli" which appropriately translates as "a feast of avocadoes with chili") and the Florentine codex attest the Nahuatl word in this period - long before the first appearances of the Spanish word.

So the word guacamole does not come from a word meaning "testicle sauce", nor from a half Nahuatl half Spanish that can be analyzed as meaning "ground avocado" as Snopes.com implicitly suggests. It comes from the Nahuatl word ahuacamolli which means an "avocado based sauce".

If Nahuas ever used the word as a slang word to refer to semen or other naughty "testicle juices" we will never know, but there is no evidence to suggest that they did.

Also: Pro-tip to Americans: Please stop saying "Guac" when you order guacamole in your burrito at Chipotle Mexican Grill. Whenever you utter this abbreviation a little Nahuatl speaking kitten somewhere dies.

[Update: Brooke Binkowski of Snopes.com has reacted to a link I posted on facebook to this blog, and edited the article which now no longer contains the (mis)information given above. ]