In my previous post I argued that the state of Morelos was predominantly Nahuatl speaking in 1910. As we know, that is not the case anymore.

In this post, I use three sources to show the decline of Nahuatl in Morelos from 1897 to 2014 graphically.

The earliest source is an 1897 Nahuatl wordlist compiled by Antonio Peñafiel, on the map I plot in all the communities where he collected Nahuatl vocabulary. As a minimum we know that there were Nahuatl speakers in those locations in 1897. In 1941 anthropologist Robert Barlow was involved in a project meant to teach Nahuatl language literacy to the Nahua of Morelos. He tested a group of teachers and the locations of the towns where they were from is plotted in on the map. In 1976 Karen Dakin and Diane Ryesky surveyed Nahuatl in Morelos and found Nahuatl speakers in a couple of communities that I haven't put on this map yet, in Axochiapan and Atlacholoayan. And then today Nahuatl is spoken in 6 communities of which Cuentepec is the only one where it is the main community language spoken by all age groups. In Tenextepango in the municipality of Ayala, the speakers are all originally from Guerrero who arrived in the state within the past 40 years.

I have plotted the towns into this map of the state of Morelos, using different colors to distinguish the age of the last attestation of Nahuatl spoken in the locality in the sources I use. They give a visual representation of the process of decline, starting from the lowlands that were most severely affected by the violence of the revolution.

Here is my map (please don't use it without attribution to me): 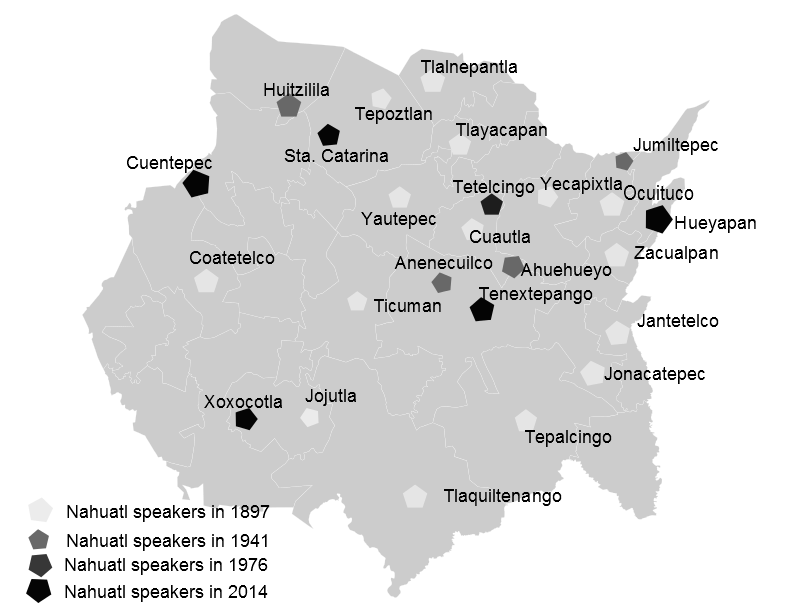