Nahuan Supremacy and the Aryans: On T. S. Denison's "The Primitive Aryans of America"


In 1908 Thomas Stewart Denison (1848 - 1911) published a book titled "The Primitive Aryans of America" in which he purported to demonstrate beyond any reasonable doubt that the Nahuas of Mexico were not indigenous to the American continent, but that they were descendents of people from Central Asia who spoke a language of the Aryan branch of the Indo-European language family. In order to do so he used the method of comparative philology which had been originally used to establish the relationship between European languages such as Latin, Germanic, Celtic and Greek to the Indian (or Aryan as they were then sometimes called, before the term Aryan got its Nazi connotations) languages such as Sanskrit, Pali and Hindi. The book can be read here.

As scholarship the book is worthless, for reasons I will describe below, but what is really interesting about it is the way that it fits into a particular racial and political ideology about Nahuas, Aztecs and the Nahuatl language. This particular ideology was prevalent in the late 19th century, and is still sometimes found among scholars and cultural activists: the ideology of Nahua supremacy.

Denison himself at no point appears to make political statements, nor does he explicitly push any ideologies about race, but once it is clear that the argument has no actual empirical basis,it becomes clear that the only explanation that someone would write a several hundred page work trying to tie the Aztecs to an Indo-European past must be a certain ideological necessity (even if it is implicit and subtle).

At best the data that Denison musters to support his argument can be understood as chance resemblances and at worst as (unconscious?) data manipulation. This kind of work is well known to all historical linguistics who all at some point have had to deal with crackpots positing exotic linguistic connections based on bad evidence. I think the problem is inherent in the comparative method, because it relies crucially on creative thinking seeing new patterns in the data, this process itself invites a particular kind of creative mind to the process. And since there also is not a very well established set of criteria for the rigor with which claims should be supported (there are some guidelines of course, but interpretations of them vary widely) it is almost inevitable that creative thinkers will be able to mold the method to get the appearance of rigor while in fact simply using a kind of  reasoning that proves nothing but something about their own subjective world of ideas and associations.

The most basic criteria for using the comparative method is that at least the forms and meanings used for comparison should actually exist in the languages compared. Denison falls short of this criterion almost throughout the book, using non-existent invented nahuatl words, or changing their meanings subtly or not so subtly to make it easier to establish connections to Indo-European words. For example when he wants to compare Nahuatl cualli "good" to Sanskrit काल्य (kālya "agreeable", "auspicious") and Greek καλός (kalos, "good", "attractive") he invents the additional meaning "fair" to take the Nahuatl word closer to the Greek meaning. The Nahuatl word is more likely to be related to the verb cua "to eat" and have been derived from a word meaning "something edible".  When the form doesn't match the word, he invents a hypothetical proto-Nahuan form that looks closer to the one in the Indo-European language and then uses that for the purpose of comparison. For example when he compares Nahuatl comitl "pot" to Sanskrit  कुम्भ (kumbha, a kind of pot), he invents a proto-Nahuatl form *kombitl, adding the b, to make the word look more similar. Historical linguists do invent reconstructed proto-forms to be used for comparison with higher level families, but for this not to be merely wishful thinking these have to be based on evidence from the lower level of the language for which the proto form is propose,d not from languages outside of it with which it is compared. For example if any Nahuan language had a form of the word for pot that had the extra b he posits, THEN he could have proposed it. But none do, so he cannot. It is beyond the scope of a blogpost to recount the many ways in which he abuses the data and the methods of historical linguistics throughout the book, but perhaps someday I will have the time to do so. Just for the fun of it. As a taste of what Denison works like I give the snapshot below of his table comparing Nahuan placenames in the mythical account of the migration from Aztlan to places in the Central Asia. 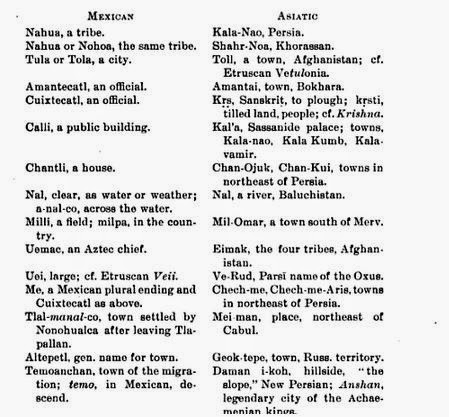 In order to understand why a man would spend all this paper and energy on a project like this we have to look a little at the time in which he lived and what ideas were circulating then. Historical linguistics was not a new science, but it had not yet really been applied to Native American languages. Many were unsure if it were even possible. It was not until 1913 that Edward Sapir first established the relationship between Nahuatl and the Shoshonean languages of the U.S. using the method in a rigorous fashion.

At the same time many scholars believed in polygenic theories of human evolution. The theory that humans had emerged separately on the different continents. This would assign the different "continental races" to the status of what was essentially different species. If this were the case then there was no reason to suspect that Native American languages were related to languages form the Old world. Indeed many believed that probably they weren't even languages in the same sense as European ones with grammar and rules of pronunciation and syntax. In this sense showing that a New World language was related to an Old World one would be quite an important feat. But this is not the main feat that Denison seems to have had in mind, because he considered Nahuatl to be unique among the Old World languages in that it was not at all indigenous. It was to him a language of Aryans that had crossed into the New World and forcefully submitted the local primitives to their will establishing an empire to rule over them.

In this way he drew on a long series of historical speculations about the relation between race and civilization. The most egregious example of such speculation is the French "count" Arthur de Gobineau (1816 - 1882). Gobineau was the first to use the word "Aryan" in a racial sense when he used it to describe what he believed was the supreme human race destined to destroy all other races with their superior might and intelligence, or else be destroyed by the envious petty masses of non-aryan underlings. Gobineaus main argument for Aryan superiority was that all civilizations had been created by Aryans, which he took to prove their innate superiority. To make that argument however he had to first find ways to describe all civilizations outside of Europe, including the Egyptians, Sumerians and Ancient Indian civilizations as somehow having been founded by "lost" Aryan tribes (whose wanderlust and entrepreneurial spirit was prone to take them on adventures in foreign lands).

Both Denison's use of the word Aryan, and his basic argument, namely that the Nahuatl language and the culture it represented were superior due to an European heritage, fits entirely into this pattern of white supremacist racial thinking, which could not conceive of indigenous cultures as being unable to make independent cultural achievements, and which saw history as an evolutionary process in which "less fit" cultures were gradually replaced by the more fit.

In Mexico similar ideas thrived. Mexican linguist Francisco Pimentel (1832 - 1893) subscribed to the idea that some languages were innately superior than others, and that in a situation of contact the superior one would inevitably erase the inferior. For Pimentel this meant that of all Mexican languages Nahuatl, having imposed itself on other native peoples, was the superior, and also that in comparison to Spanish, Nahuatl was inferior and would have to eventually disappear. The same idea was common throughout the Mexican national establishment in the 19th century (this has also been described by Claudio Lomnitz). In his 1970 book Posdata, Octavio Paz refers to this view of Mexican history as "una pirámide trunca" (a truncated pyramid), where the Aztec civilization is seen as the platform on top of the pyramidal structure of Mesoamerican civilization, but a pyramid that still needs the peak, the summit, to reach fulfillment. Logically then in this view the Spanish conquest finally provides the conclusion of Mesoamerican history. Another metaphor that may work better today is that it is a kind of "World Cup" view of history where people face of on their local continents until a continental winner defeats everyone else on the continent and then they start playing between continental winners to find the final champion. Obviously the main group benefiting from this view would be the Spanish minded Mexicans who could put themselves in a situation of seeing their political ascendancy as natural and inevitable, and indigenous people crying for justice simply as sore losers. In this way inevitably the ideology of Aztec supremacy in Mesoamerica (through military might) leads to the corrollary of Spanish/European global supremacy.

Unfortunately this view still exists in academia. In 2007, UNAM, Mexico's National Autonomous University published the book "El Primer Mestizaje" by the French archaeologist Christian Duverger. This book argues that contrary to the established consensus that the Nahuas were late comers to Mesoamerica, in fact they created Mesoamerican civilization by gradually conquering all the other peoples, erecting all the known monuments and being the prime movers of all known Mesoamerican societies where they dwelled as the sophisticated lords ruling over the dull and uncreative masses of Otomian, Zapotecan, Mixtecan, Totonacan, Mazahuan, and other non-Nahuan peoples. Duverger does not use the word "Aryan", but clearly his model is the same as the classical model from India that sees the lightskinned intelligent Aryans as conquering and ruling over the brown Dravidian masses whom they bring civilization. I will probably be writing more about Dugverger's book, its many many problems, and about some of its derivative works in the field of linguistics in later blogposts.